NASA, Stars, and Science in the Book of Job reveal Your Hebrew Bible is accurate

Never feel pressured to give a donation. While we rely on the gifts of our readers to move the development of the Messianic Prophecy Bible forward, this ministry desires to receive gifts knowing that people are partnering with the Lord and being led by Him in their giving.

The idea that science and the Bible are incompatible is common these days, both in secular academia and public schools. 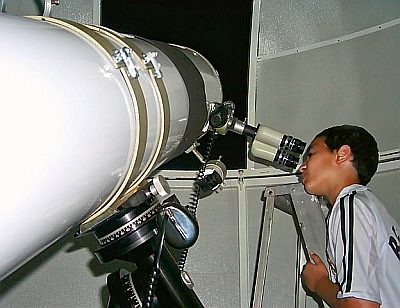 When I consider the heavens: the Bareket Observatory in Israel developed
the Israeli Internet Telescope, which gives teachers and students control
of the telescope from their school or home.

Despite all the assertions that science is at odds with the Bible, the Bible is in fact chock full of good science. Some of it is probably ahead of our current understanding, and some of it we are only beginning to understand.

One example of this is in the field of astronomy.

In Job 38, Job (Iyov), a righteous man who Satan stripped of wealth, children, servants and health, is finally given his desired audience with God. Job wants an explanation of the reasons for his loss and suffering.

In answer, God asks him a series of questions that challenge Job’s limited knowledge of the mechanisms of the universe.

One of God’s questions is “Can you bind the beautiful Pleiades? Can you loose the cords of Orion?” (Job 38: 31) 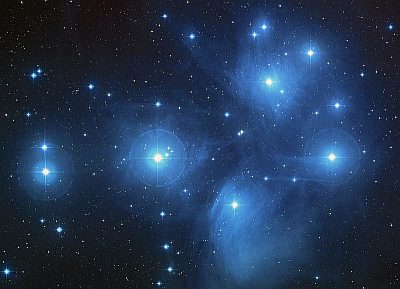 A NASA picture of Pleiades, taken by Hubble, which is a telescope that
orbits the Earth.

Amazingly, among the 1,500 plus open clusters, which modern science identifies as gravitationally connected stars, are the clusters Pleiades (Seven Sisters) and Orion.

Significantly, Pleiades and Orion are on a short list of open clusters that are visible to the unaided eye: Alpha Persei, Beehive Coathanger, Coma Berenices, Double Cluster, Hyades, Messier 6, Messier 7, Messier 35, Pleiades, Ursa Major, and 15 Fainter Clusters (University of Illinois). Orion is among the 15 Fainter Clusters.

When we examine the Hebrew in this verse in Job that refers to these open clusters of stars, it seems to refer to the force of gravity.

The Hebrew word for bind is kashar, which means to tie or join physically together.

Although ma’adannah is translated beautiful in the NIV, it also can mean bonds, fetters or influence.

The Hebrew word for cords is moshekah, which comes from moshak meaning to draw or drag. 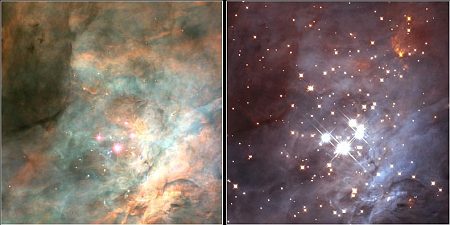 NASA photographs of the Orion Trapezium Cluster: the photo on the left was taken
with the Hubble’s optical camera, and the one on the right with its infrared camera/ spectrometer.

Without the help of modern science, the Book of Job correctly identifies two open clusters of stars as being chained or tied together.

Until recently, we couldn’t have understood the significance of these words.

Today, we know about “open clusters” because of astronomical spectroscopy, a technique that began with Isaac Newton’s observations of the Sun’s light and has advanced to the study of the frequencies of emitted and absorbed energy, including visible light.

Since Job is one of the oldest books of the Bible, if not the oldest, how could the writer have known about the gravitational forces among clusters of stars?

How could he specify that these two groups of stars are physically connected? 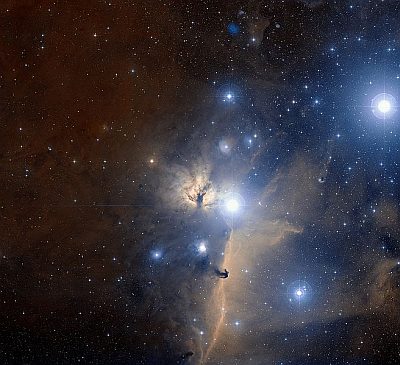 The region of Orion’s Belt and the Flame Nebula, photographed by the
European Southern Observatory (ESO). The glowing gas clouds are
thought to be illuminated by the blue stars.

Such sound science is confirmation of the inspiration of the Hebrew Bible, which is God-breathed.

As 2 Timothy 3:16 – 17 states: “All Scripture is God-breathed and is useful for teaching, rebuking, correcting and training in righteousness, so that the man of God may be thoroughly equipped for every good work.”

Of course, God created everything, so it should come as no surprise that the inspired word of God has something to say about the inner workings of the universe.

“He who made the Pleiades and Orion, who turns blackness into the dawn and darkens day into night, who calls for the waters of the sea and pours them out on the face of the land—the Lord is His name.” (Amos 5:8)

“He determines the number of the stars and calls them each by name. Great is our Lord and mighty in power; his understanding has no limit.” (Psalm 147:4–5) 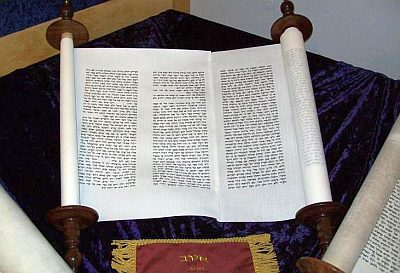 The Hebrew scroll of the Book of Job

will you sponsor our Messianic Prophecy Bible Project? Click here

Good Science in the Bible

Gravitational forces operating in the star clusters of Pleiades and Orion is just one of many examples of sound science in the Bible.

While the Bible does make use of metaphoric language in relationship to nature, science is never at odds with the Bible.

Here are five perhaps more familiar instances of the Bible’s accuracy when it comes to science:

1) The Bible says that the Earth is suspended in space. Once again, the Book of Job gives us this now incontrovertible lesson in astronomy.

“He spreads out the northern [skies] over empty space; He suspends the earth over nothing.” (Job 26:7) 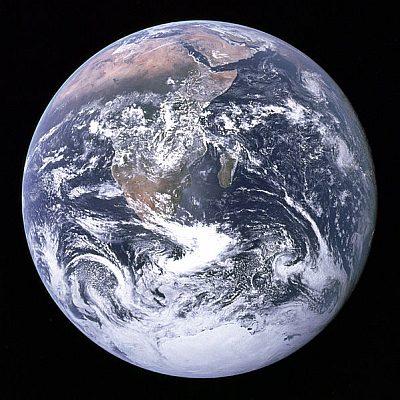 The Blue Marble suspended in space: This picture of Earth was taken by
a hand-held Hasselblad camera on December 7, 1972 from Apollo 17, as
it traveled to the moon on the last Apollo mission. Israel is toward the top.
Africa is at upper left, and stretches down to the center of the image. At
the bottom is Antarctica and the south pole.

2) The Bible also contains many statements about the absolutely vast number of stars in space.

Scientists still really have no idea how many stars are in space, although some do put forward estimates.

In the Milky Way alone, there are an estimated 100 thousand million stars; and millions upon millions of other galaxies (European Space Agency). 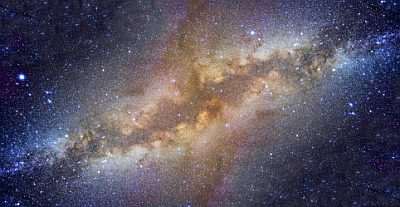 Photograph of the Milky Way

3) Job also provides a remarkable lesson in hydrology, describing how water first becomes vapor before it comes down as rain:

“He draws up the drops of water, which distill as rain to the streams; the clouds pour down their moisture and abundant showers fall on mankind. Who can understand how he spreads out the clouds, how he thunders from his pavilion [sukkah]?” (Job 36:27-28)

4) In terms of geology, the Bible clearly describes the Earth as spherical or rounded, and not flat as previously believed in ancient cultures.

“He sits enthroned above the circle of the earth, and its people are like grasshoppers. He stretches out the heavens like a canopy, and spreads them out like a tent to live in.” (Isaiah 40:22) 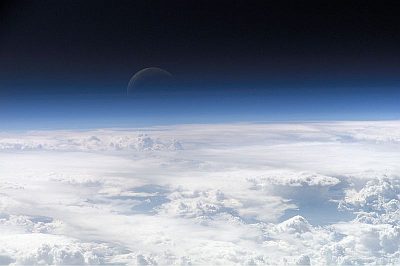 The Top of the Atmosphere: This NASA photo of Earth was taken by the
International Space Station crew Expedition 13 over the South China Sea.

5) Many of us rely on the weatherman’s understanding of meteorology to make decisions about how we will dress in the morning. The Bible also reveals something about atmospheric phenomena by describing the circulation of the atmosphere.

“The wind blows to the south and turns to the north; round and round it goes, ever returning on its course.” (Ecclesiastes 1:6) 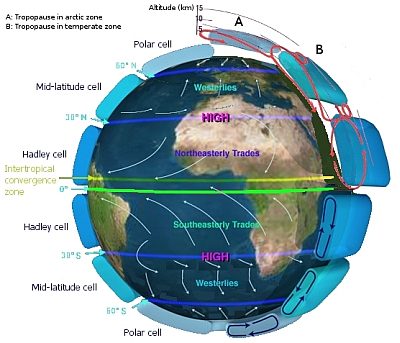 Even though the Bible is entirely consistent with scientific facts, there will always be things in the Bible that we don’t understand.

But the fact that there is so much good science in the Bible should encourage us that even if we don’t understand some passages when we read them, there is every reason to trust the Bible as God’s inspired Word. 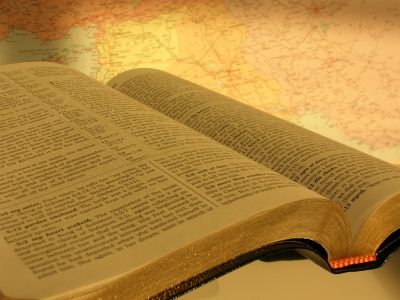 During these last days as people run to and fro on land and sea and through the air, and as our scientific and technological knowledge increases, please partner with us as we help the Jewish People and the nations come to a saving knowledge of Yeshua (Jesus) and the Word of God through the vitally important Messianic Jewish Prophecy Bible Project.

“But you, Daniel, close up and seal the words of the scroll until the time of the end. Many will go here and there to increase knowledge.” (Daniel 12:4)

Posted by Yeshuaarmen on 27. June 2012 in Ukategorisert